Wondering how autonomous vehicles might impact the Pike District — and the rest of the world? This article from 99 Percent Invisible shows both the potential good and bad that might arise from this revolutionary technology.

Autonomy will change cities as much as cars did,” says Silicon Valley venture capitalist Benedict Evans. “Thinking this is just about ‘self-driving cars’ is like talking about ‘horseless carriages‘.” No one is quite sure what shape this shift will take, but if the past car-driven century of sprawl has taught urbanists anything it’s that change isn’t always good. But for better or worse, it’s clear this disruption will go well beyond just how we get from Point A to Point B.

Author Chenoe Hart explores one extreme (and largely optimistic) end of the spectrum in a piece titled Perpetual Motion Machines, noting that “hypotheses about ‘driverless’ cars still presume there will be such a thing as drivers and passengers, trapping us within the current incarnation of our transportation system.” In other words: we’re too limited by our current paradigm to even imagine the possibilities. 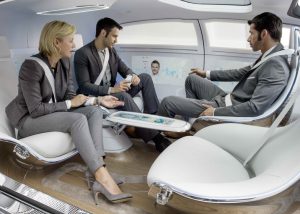 Occupants liberated by computer control and interior redesigns could be free to sleep in mobile bedrooms, drink and socialize in communal or interlocking vehicles, or simply live out of a forever-mobile home (no garage required). Larger vehicles might dock with smaller ones in motion, reducing transition lag and optimizing last-mile stretches in vast transit networks. “Our future passenger experience might bear little resemblance to either driving or riding,” suggests Hart. “We’ll inhabit a space that only coincidentally happens to be in motion.”

Insurance, ground transportation, automotive repair and the like are naturally high on the list of industries likely to be most impacted, but what about other forms of transit, urban design and real estate itself?

Estimates suggest driverless vehicle sharing could reduce cars on the road by up to 90%. Accordingly, some predict a boom in landscape architecture as transportation space becomes public space (a phenomenon already being realized at small scales with parklets). “I certainly want to believe it,” Nancy Somerville, CEO of the American Society of Landscape Architects told CityLab. “That would continue what we’re already seeing, a major trend already underway to recapture and reuse underutilized or formerly utilized urban space.”

Along similar lines, the ability to sleep in mobile rooms changes the dynamic for land travel. Much like sleeper trains, but with flexible schedules, passengers could pick departure and arrival times to allow overnights. All of the comforts of a hotel could be available without the cumbersome planning and booking.Sven Schuwirth, vice president of brand strategy at Audi, thinks autonomous vehicles could spell doom for domestic flights and hotels. Consider the impact, for instance, on the airline industry. Continuous time in a flexible vehicular interior could become much more appealing than shorter flights that involve going to and from airports, waiting in lines and getting patted down by strangers. Instead, passengers can relax, work and recreate from door to door even if it take a little longer.

Thanks to the shift toward electric vehicles, all of this could be accomplished while reducing pollution. But even with electrification reducing per-vehicle carbon footprints, there are some potential dangers to the convenience of (or blind faith in) automation.

“The dream of cheap, clean mobility in cities might run up against some harsh realities—soaring energy consumption, supercharged sprawl, and intensified traffic congestion—if AVs are simply deployed to encourage more driving,” writes Andrew Small of CityLab.

Their publication envisions narrower traffic lanes for autonomous vehicles, which can presumably navigate with greater-than-human precision. It also features flexible zones to accommodate more individual vehicles during higher-traffic times of day. These would then be used by delivery and other service vehicle lanes outside of rush hours, and re-tasked as nightlife pickup and drop-off spots in evenings. Flexible spaces could also be allocated for drone deliveries. 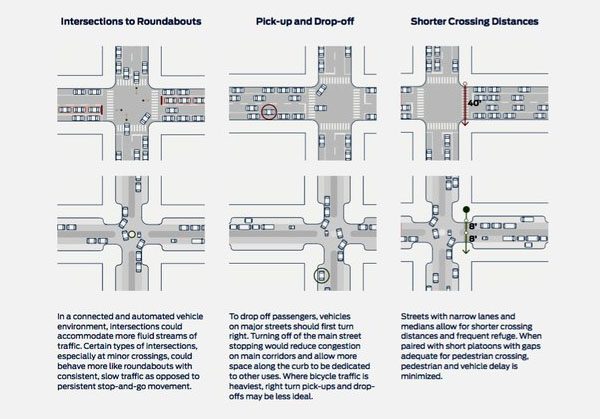 “The blueprint is for building the safer future streets that cities need, where speeding is no longer an option, where cars are designed to yield and stop for pedestrians and bicyclists by default, and where people are free to cross the streets where it makes sense, rather than trek a mile to the nearest stoplight,” Mollie Pelon, who oversees NACTO’s technology and city transportation program, told WIRED.